Call out for Endorsements

“Gentrification is intensifying; the housing crisis is deepening, and the health of the people and community are under serious threat.  Desperate times call for desperate measures.”
- Homeless Dave
April 2, 2013 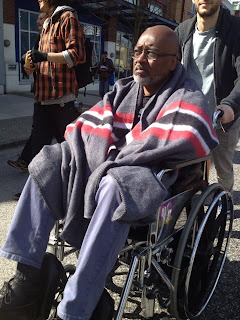 Dear friend of the Downtown Eastside:

Will your group endorse the following demands for housing in Vancouver and to stop gentrification?
Homeless Dave, a DTES resident, is now in the second week of a hunger strike to protest gentrification, displacement and to demand adequate social housing. His demands are:


The City has misled the public by claiming DTES housing is under control. In fact, there are 850 homeless people in the DTES and 5,000 SRO (single-room occupancy) rooms that need to be replaced with affordable apartments. As we lose low-income housing it is not being replaced. Last year, 170 condo units were built, only 24 new social housing units opened, and 425 more low-income units were lost to rent increases. In Chinatown, 571 condos were approved in the last year and only 11 social housing units. In this extreme housing crisis, the City is encouraging high-end restaurants and condos, pushing up land values, pushing out affordable businesses and raising rents so that low-income people can no longer afford to live and shop in their own neighbourhood.

Dave has type 2 Diabetes and is only drinking sage tea and 325ml of Happy Planet juice daily. While we are very concerned with his health, we are confident he will get through this trial. He is strong, stubborn and a symbol of the resistance and resilience that have always been central to struggles for social justice.

We ask that you and your organization endorse this very important action.

Thank you for considering this request. If you need any more information or want to get involved please call Wendy Pedersen at 604-839-0379.

“We’re not about smashing windows. We’re about smashing the old broken paradigms and building new paradigms that are more just and equal.” – Homeless Dave
Posted by dteshungerstrike at 00:04