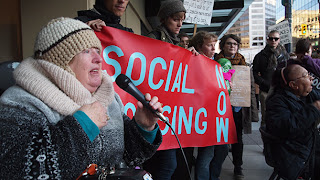 CALL OUT FOR SUPPORT -- TUESDAY :
Come along with Homeless Dave to Dix's fundraiser in Chinatown tomorrow night. Stop BC Housing subsidy of condos at Sequel 138. 100% social housing! Why is housing for homeless and low-income people not an election issue? We're tagging on to the social housing coalition (see below). DTES residents meet on 2nd floor for dinner 5:30PM.


END THE LIBERAL LEGACY • SOCIAL HOUSING NOW!
So it looks like Tuesday evening will be a busy one for the NDP, and that means opportunities for the Social Housing Coalition to engage NDP members and supporters with our demands for social housing and rent controls. There are two back-to-back events that night:

This week, the NDP released their 2013 election platform fiscal plan and there is not much room in there for housing. After 12 years of BC Liberal rule, the housing crisis in BC has made Vancouver the most expensive place in North America and one of the most unaffordable places in the world. The only city with a less affordable housing market than Vancouver is Hong Kong, but the difference is that in Hong Kong, about half the housing is social housing for low-income people.

Come to one or both of these events to call on the BC NDP to take action to end the Liberal legacy by launching a serious social housing program and put in rent controls to end the housing crisis in BC.

Dave and friends went to NDP Adrian Dix’s fundraiser at the Floata restaurant in Chinatown with crowd of www.socialhousingbc.com supporters. The goal was to try to break the silence around socialhousing in upcoming election. Dave and DTES residents want to know why BC Housing is using tax payer’s dollars to bail out a condo developer in the DTES when 1000’s of people are homeless, 5000 working class homes (SRO rooms) in the DTES are being wiped out by gentrification, rent control is desperately needed (especially in the 2nd most expensive city in the world) and 10,000 units of social housing are needed a year across the province for women, for Aboriginal people on and off reserve, for migrants and everyone else who is hurt by systemic poverty.

Councillor Adriane Carr came to the picket, but didn’t endorse demands. She promised to look into their feasibility as a first step. Plus she said she would try to get a motion passed to discuss the demands at City Council.

The Mayor’s office has virtually ignored Dave’s request to meet and we need to do something about this.

Dave’s health getting worse and there is not much time to get the demands met. Still need your help at the pickets! Weekdays noon to 2pm (first hour at sequel, second hour at cop shop) and
Tues to Sat from 6-7pm at Pidgin.